There is a new house being built in the Baring Cross area of North Little Rock.

The shotgun-style home will be a little more than 1,200 square feet, have three bedrooms, two bathrooms and a nice porch. Construction was planned to start by the end of this month.

And this home is the first that will utilize new interior and exterior plans designed by Williams & Dean Architecture | Interior Design in Little Rock.

The idea to update floor plans of houses started when Kelly Fleming became executive director of Habitat for Humanity of Central Arkansas just under two years ago.

Her goal, she says, was to “improve everything,” which included home design.

“Our floor plans are quite functional and very efficient, but we’ve been using the same ones for several years. It was time for a refresh.”

Offering to help was James Williams, one of the principals of Williams & Dean. A couple of people with ties to the firm also had connections with Habitat for Humanity, and Williams, who is retiring soon, says he was happy to donate his company’s services when he learned of Habitat’s hopes for upgrading its house plans.

“Habitat was a natural thing because since 1976, when we started this firm, we’ve always done housing — custom houses, multi-family apartments — and so Habitat for Humanity was interesting to me.”

He, along with Williams & Dean architects Jesse Peterson and Nada Hamida, used Habitat’s existing plans to create a prototype.

“Habitat for Humanity has been using the same floor plans for many years and several things were dated or didn’t quite work functionally,” says Peterson, Williams & Dean’s vice president. “We had the opportunity to make things work better and look better.”

Hamida, a native of Aleppo, Syria, started at Williams & Dean about four months ago. The Habitat project is her first experience working on a residence.

“It means a lot to me personally,” she says. “When someone mentions affordable housing, there’s a certain image that comes to your mind. I’ve been excited to work on something that changes that a little bit and hopefully do something that will make an impact.”

They created a new plan “in the same budget requirements that will work for their programs, but give it a little more character and add some amenities,” Williams says.

Among the upgrades to the Baring Cross home are easier access from the garage into the house and an open kitchen and dining area.

“They’ve drawn a floor plan that has an island between the kitchen and the dining/living area as opposed to a wall so it feels more open,” Fleming says. “And they’ve drawn it so we can have a vaulted ceiling in those areas and it makes the house feel bigger.”

Habitat for Humanity plans to build up to 12 houses in the Baring Cross area in the next few years, Fleming says.

“We think this will go a long way toward revitalizing the neighborhood,” she adds.

“I believe one of the side effects of this will be making the area get noticed again,” says Williams, who grew up near Baring Cross.

Habitat for Humanity’s mission is to provide housing for low- to moderate-income families.

“It truly is a hand up, not a hand out,” Fleming says. “Partner families have to exhibit a need for housing, they have to fall within a certain income range and they have to partner with us by putting in 300 hours of sweat equity on their home or another Habitat project in lieu of a down payment.”

The nonprofit is also a construction company, a mortgage firm and operates a retail arm with its Habitat for Humanity ReStores, Fleming adds.

“And we’re kind of a social services agency,” she says. “We are meeting people with a need and trying to help them fill that need and improve their lives.”

Since it was founded in 1989, the Central Arkansas affiliate has built more than 200 houses and rehabilitated more than 600, Fleming says.

The Baring Cross house is likely just the beginning of the partnership between Williams & Dean and Habitat.

“There are three prototypes that Habitat has and this was the first we had the chance to modify,” Peterson says. “Our hope is to modify the others.”

“Our intention is to be a partner when they need us,” Williams adds.

Fleming says partnering with Williams & Dean has been a joy.

“We’ve been talking about this since I got here and then one of our board members told us that James Williams would like to talk to us. This is one of those incredible things that just falls into your lap. Our home buyers are going to be thrilled.” 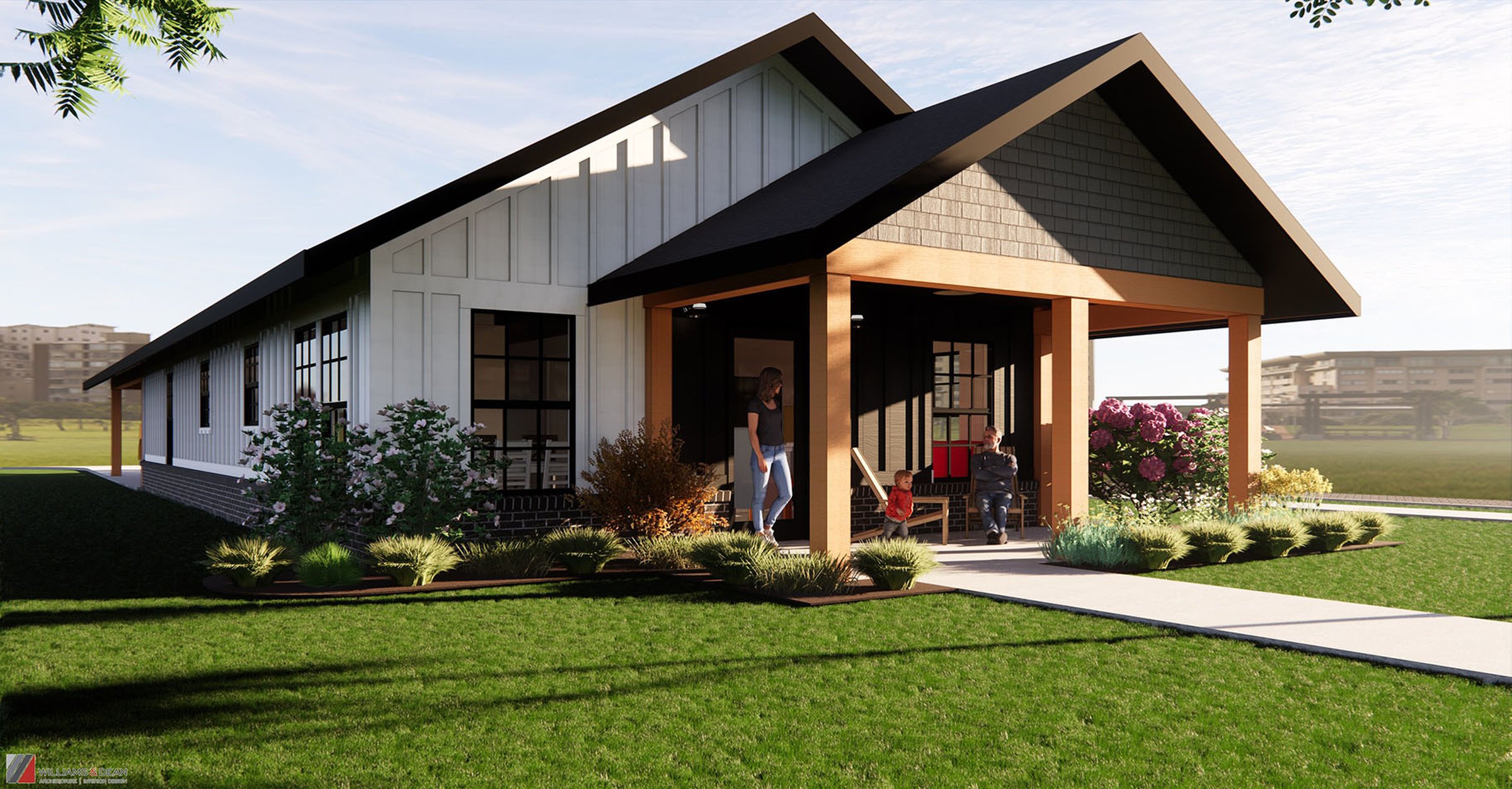